What would I write to a younger Nancy? 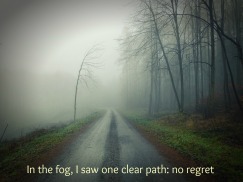 It seems all the rage now. Blog posts and essays that are winsome letters to “the me I was back then.” For some, I’m sure it is meaningful and reflective.

For me, however, it is just another way to beat myself up. A lovely way to regret.

And it reminds of the promise I made not to. Beat myself up, I mean.

April is the final month of the deep purple funk. It starts in February-ish when my body remembers before I do that spring is rough. For those of you newer to my world, my first husband, Bill, died in April, 1990. Five years later, my dad and grandmother both died in late March. Spring is rough. And my body never forgets.

But in the days right after Bill died, I made a promise to myself that I have kept to this day. I vowed that I would never, ever live the rest of my life regretting what I had gotten all wrong as a wife. I would not let ugly reminders of my bad behavior and selfishness ruin the memories of a beautiful life.

Bill and I didn’t go through young marriage like most people do. He was older than me, a marriage veteran with four children. So we didn’t have the same “newly-married” stumbles that many couples have.  I was the rookie and he was determined that this one would not go south. As I was growing up, he was holding us together.

Which meant I made a lot more mistakes than he did. That’s not a dramatic reveal. It’s just the truth. I was often selfish or moody and, at the time, felt justified and righteous. But after each tantrum, it was pretty clear: I was just being ridiculous.

Like I said, I was growing up. And he was strong enough to hold on.

During those difficult days after his funeral, I lived in a fuzzy haze. My train of thought was often derailed. And I used the auto-pilot built into motherhood to carry on.

But, I knew that, if I began to relive any of the failed moments in our marriage, I would eventually relive all of them. I would never get to the “bittersweet” of loss if I chose to wallow in the bitter. I would let myself be pushed around by regret and the self-imposed curse of failure. I would never regain balance.

That is not what Bill wants. He is not wasting a bit of his heavenly eternity hoping I am burdened with unresolved regret. He is too busy using big nails and flawless wood to build decks, gazebos, and screened-in porches (do they need screens in Heaven?) He is keeping busy until we join him.

Not for one single ding-dang minute does he or anyone else who has gone before want us to “pay” for our shortcomings.

Good golly, Miss Molly. We have enough to think about. We have new mountains to cross and maps to decipher. There is a maze every day to navigate through. I can’t afford to use my energy to rework an episode that is already (as they say in the movies) a wrap.

Please don’t misunderstand. I’m a big fan of Christian therapy. It’s both a blessing and a relief to figure out where our wobbles came from and why we just can’t get through this puddle of sludge. Investigating the past to improve the future can be a vital part of our mental and emotional health. Big fan.

And perhaps writing a letter to a younger self is good therapy.

But it’s not good for me.

I choose to cherish the memories. Live from today with hope that the older me looks back with no regret. Click it to Tweet it.

And, for Bill, I choose to remember who I am and what I represent.