It had been a REALLY rough day at school. I was at the local library, checking out at least 50 books about The Westward Expansion. 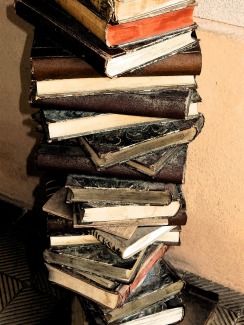 The books were heavy. It was already dark. I was probably hungry.

OK, maybe it wasn’t raining, but it sure was a bad day. I didn’t have an ounce left.

As I left the library, feeling like the very worst version of myself, a young woman was coming up to the door and kindly held it open for me. It was one of those naturally-choreographed exchanges that you don’t even have to think about: she opened, I exited, she entered.

Nobody waited for anybody.

It was the normal human thing you just do that happens a million times a day.

Except for one thing: I didn’t say the customary Thank you. Because I didn’t have an ounce to give her.

With a huff and probably raised eyebrows. And some serious judgement mixed in. And loud enough for me to hear.

Honestly, I didn’t think I could feel any worse. But I did. I felt like I should run right back into the building and apologize profusely for my gross negligence and rude behavior.  And beg forgiveness. And maybe even ask if we could be Facebook friends.

And, I was mad at myself. Embarrassed. And near tears.

And then, I was mad at her.

She had absolutely NO idea about my day. If she had walked a mile in my shoes, she would have not only opened the door for me, she would have helped  me carry those 50 books to my car and perhaps even offered me a glass of wine. (Just go with me on this one.)

But then, some of the sordid episodes of my past started to color the picture. I heard my own voice, sarcastic and judgmental about someone else’s less than stellar behavior. And, I knew deep down that, most likely, if I had been Little Miss Door-Holder, I would have done exactly the same thing.

Maybe not out loud – because after all, I don’t want to appear judgmental.

Unfortunately, it’s not how I appear to others that matters. It’s the condition of my heart. And, when I fail miserably in the private Don’t Judge photo booth, the picture of me isn’t that flattering.

So this year, especially during this hectic season, I am going to do my very best to give people a pass when they don’t thank-you appropriately as I hold the door for them. Or when they cut me off in traffic. Or they grab the last sale-priced Lego kit. Or have 17 items in the 12-items-or-less lane.

And, maybe I’ll even help them carry those packages to the car.

Wishing for you joy and the promise of heaven…
Oh … just
Last week. Last 7 #journalpockets…
Sometimes bright #92/100
Posting every day is hard … and *not* posting every day isn’t much better. But I’m still up to date and trying something new (blackout-that’s-not-black poetry)…
Not new … just different
Loading Comments...
%d bloggers like this: