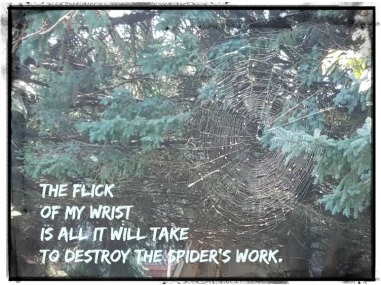 One morning, this spider’s web, spanning about two feet in diameter, appeared outside our patio door, After a bit of research, I found it is mostly likely an orb weaver created it in about an hour. It was attached to a lilac bush to the left and a pear tree, six feet away, on the right. The ground anchored another silk-like thread. It glistened in the sun and withstood a rather blustery wind as it danced around in the early morning.

An orb weaver’s average life span is about one year.

The average life span of a human is just over 78 years.

So, quick math determines that it took the weaver the equivalent of more than three full human work days to make its masterpiece.

And, yet, with something as simple and mundane as a toothpick and a quick flick of the wrist, I could destroy it all in a quick second.

I could, with no effort and little forethought, tear apart the good and noble work of a creature just trying to survive. Just like me.

Just like a 97-year-old woman I know very well. She was once a bright and self-sufficient person. Book smart and savvy.

But her memory and mind are failing. She feels helpless at times and hopeless almost always. She misses the days when things came easy, and she is humiliated by her inability to come up with quick answers. She keeps a kitchen timer in the top drawer of her dresser but has no idea what it’s for. She can’t remember where to put dirty laundry. She forgot that she had an older brother.

But she carries on. Every day, she takes her meals in the dining room of the retirement village she calls home. She and Ralph sit together, a perfect match. He loves to talk; she is content to listen.

Recently, she invited a woman who had just moved in to sit with them, knowing what it’s like to be the new kid on the block. It wasn’t easy to reach outside of her well-ordered world, but she knew it was the right thing to do.

But the right thing isn’t always the good thing. When I arrived for a recent visit, she couldn’t wait to tell me, in a soft, wobbly voice, that someone had called her a “dummy”. The new lady, invited graciously to the table, took my friend’s crumbling mind and turned it into a weapon, sharp and almost deadly.

I am heart sick, at a loss of what to do. I want to confront the newcomer, but I fear retaliation. I want to tattle on her to Mr. Retirement Home Director, but I fear it would be considered trivial and dismissed.

What makes this even worse is the medical reality of aging memory loss. My friend doesn’t remember that she told me at least five times in only ten minutes what we will have for lunch. She proudly introduces me every single time we walk past the security guard. With every visit, she insists I browse through the binder of family history she compiled, forgetting how often she has shared the same details of her life, her family, her marriage, and her dreams.

But I fear she will never forget those fleeting moments when a newcomer’s thoughtless, hurtful, cavalier words crippled her. She will carry them deep inside. They will simmer with the message I am a dummy.

Now, although there are few common, everyday things that I cannot tolerate, spiders top the list. All the way to bad dreams. I don’t want to see the startling Does anyone know what kind this is? post on social media – complete with a bigger than life photograph. I don’t watch anything that even hints of arachnid. I close my eyes when I sense a movie or documentary promo coming up. Spiders are creepy.

I also know that a toothpick and the flick of my wrist is all it will take to destroy three days of a spider’s work.

Just like four little words destroyed the confidence and peace of someone I love.

A flick of the wrist that is completely unnecessary – and entirely intentional.

Four words that were completely unnecessary – and wrong and cruel – and entirely intentional.

My lovelies, I’ve known cruel words. Both hearing them and saying them. Nothing new here. But what struck me so sharply was that the newcomer was probably in her 80’s. She had, from all outward appearance, lived a long life of at least limited success. She was well put-together and mobile.

Maybe I’m being unfair. I wasn’t there when this happened. Maybe my friend didn’t tell – or doesn’t remember – the whole story.

Besides, I don’t know the newcomer at all, her situation or background. Perhaps she is at a later stage of memory loss during which a mean-spirited alter-ego, of sorts, may emerge from within. Maybe being mean was the only way she survived a perilous childhood. Perhaps she suffers from something that has turned her sour to the world. Maybe she truly cannot help herself.

But if she can, shame on her.

I know my sharp tongue has done its share of damage. I’d like to think those days are behind me now. I guess I cannot.

But I’m going to do my best to measure my words. Not to censor or silence myself. Not to shrink to the back when others elbow their way to the front. But I hope to always be mindful of how we are all like the web.

Complex and beautiful – and so easy to destroy.

If you do not control your tongue,
your religion is worthless
and you deceive yourself.

It wasn’t easy to reach outside of her well-ordered world, but she knew it was the right thing to do. Click to tweet