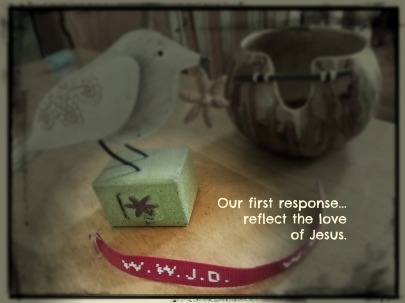 During the past few weeks, I started writing  a variety of posts. I agonized over them. I edited and revised and started over. And I growled a bit.

And then I moved them to the Trash. There’s so much to talk about. But the brittle words just scraped against each other, sounding so bleak and dreary, I did not dare share them.

Thank goodness, I get inspired or pushed or encouraged, and a spark ignites, and I write again…

A man I met at the Festival of Faith and Writing in Grand Rapids, Michigan in April is part of a publishing group and quite the poet. When I met him for the first time I fumbled about, searching for clever words, failing miserably. I thought a little follow-up I’m-not-really-an-idiot–all-evidence-to-the-contrary would help me get over my mortification and just go on about my business.

When I mentioned that I hadn’t seen him on Facebook for a bit, and hoped that he and his were all doing okay, he responded,

“I still check in on FB once in a while,
but its starting to overwhelm me,
there’s so much going on I’m finding myself avoiding it a little.
Does that make any sense?”

Facebook and Twitter = so many “shares” (aka You must surely agree with this POV – unless you are a nimrod). So many insulting memes and unflattering political photos. So much self promotion. Sarcasm. Condescending words and caustic responses. Just so much. So much that I’ve felt only discouragement, disappointment, anger, hopelessness. And I don’t want to be that girl – the one who uses this tiny space to rant. I don’t want to waste my words on the petty or insignificant… So I waited.

As I took some time to purge, cleaning out a drawer here and there, I found that old red W.W.J.D. bracelet. You know, the kind we all wore with pride in the 90’s. It was there in the same little bowl as my 12-year perfect Sunday School attendance pin and the Mickey Mouse watch I couldn’t live without. I wouldn’t have even noticed the bracelet, except it caught Audrey’s eye. We chatted as she tried it on. And a few minutes of research (thank you, Wikipedia) revealed a bit about the deeper roots of What Would Jesus Do.

In the 1896 novel In His Steps, subtitled, “What Would Jesus Do?” American Congregationalist minister Charles Sheldon wrote about a homeless man who challenged the Rev. Henry Maxwell…

I heard some people singing at a church prayer meeting the other night,

and I kept wondering as I sat on the steps outside just what they meant by it. It seems to me there’s an awful lot of trouble in the world that somehow wouldn’t exist if all the people who sing such songs went and lived them out. I suppose I don’t understand. But what would Jesus do? Is that what you mean by following His steps?

That is the question I want to ask absolutely everyone. Me, you, them, the others, mine, ours. When it is all said and done, we need to ask ourselves a question that may bring a few smirks and eyerolls. But in the end, it’s the only thing that matters.

We need to ask “What would Jesus do…

… when mothers and their children arrive at our borders, asking for nothing more than a cup of cool water and the slightest hope of security and opportunity?

… if a young black boy and a young white boy, or a young Jew and a young Muslim, or one of the Jets and one of the Sharks stood before Him with different but equivalent offences?

… if He saw someone who seemed out of place? or lost? or like they were waiting for something – or someone?”

I know it’s well beyond my pay grade to assume what Jesus would do on any given occasion. I’m quite sure He’d do something unexpected and remarkable. And perfect. I do, however, presume to say what I’m sure he wouldn’t do.

… separate mothers and children for no other reason than to punish the most vulnerable – just because He could.

… assign consequences for misguided behavior or bad judgment  based on assumptions, race, religion, or the way the wind was blowing that day.

… call the authorities to investigate the suspicious behavior of gentlemen that weren’t suspicious at all – before taking time for a civil conversation with them.

Presumptuous? perhaps. But I cannot believe our world wouldn’t be a whole lot better in every. single. way. if we all ran our actions through the “WWJD?” filter. And, stop the presses, think of how much our lives would be changed if, instead of waiting or backing away, we asked ourselves, “What would Jesus DO? Like, right now?”

Oh, you mean I should do something? Like take action? Yes. Yes, I should, and so should we all.

My lovelies, I know we won’t ever agree completely. There are right, left, progressive, conservative, liberal, you-name-it platforms for every ding-dang issue we can dream up. And we will never ever find common ground on everything.

I know we can agree on that.

But cannot we also agree that our first response, the very moment we see or hear or experience something, should reflect the love of Jesus? Jesus, who came as the least of these, embraced the outcast, and willingly endured abuse. Jesus, who did not build walls but bridges, who did not separate but lovingly gathered, and who took it upon himself to engage even the most prickly and sour to resolve differences.

Yes, we may smirk or roll our eyes, remembering our righteous enthusiasm about spreading the Good News. We may cringe when we recall the clichés and moral imperatives we tried to live by. Heartfelt, but, admittedly, a bit corny.

There is not one single place or situation that can’t be made better by asking “What Would Jesus Do?” – and then just doing it.

And, for the record, I’d bet long money He’d bake the cake.

7 pages in and I surely hope the older white lady
Saturday morning cautionary tale…
New little ribbon tag for fabric-covered journals. I quite like them…xoxox
I would guess one of the first steps in opening an online shop would be to have enough inventory to sell, right?
I’m in the mood to finish up those tiny tasks that I too often plan for “later” … like putting fabric ribbons on these 3 chirps (notice a new design made out of tiny paper bags?) headed for @lightandpinecollective tomorrow…journal on, my lovelies!!!
The tiny blank journals, perfect for purse, pocket, or (swim) tote…c’mon over to @wilsonstreetmercantile to find sweets like this - and many more! (Including really truly sweet treats at @lilyandpiesweets!)
Loading Comments...
%d bloggers like this: