I am starting a course that Blaine Hogan created called Make Better. (The tag line is Better Humans – Better Art.) More accurately, I’m starting it again. I tried it a long time ago – and by that, I mean more than 6 months ago. So I decided to just start over 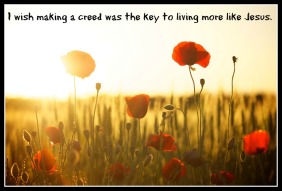 In Session 1, the goal is to create a life creed. (Creed comes from the Latin credo which means “a statement of belief.”) It’s quite an exercise. Blaine walks you through brainstorming and asking questions and leads you to determine at least the beginning of what your creed might be. He says that the creed may change over the course of the course. But at least it’s a beginning.

And since for me, you know, it’s all about balance, I made another list – words that kill my spirit: bully, cheat, inhumanity, powerless, condescending, orphan, homeless.

I listed things that give me joy: family celebrations, being home safe and sound, those Special Olympic kids that link arms to cross the finish line together, the winner whose first thought is to shake hands with second place, finding the lost tiny one unharmed.

And things that hurt my heart: man’s inhumanity to man, Simon Cowell’s nasty comments, the odd kid at school, political rhetoric, overpaid professional athletes that pout when they lose.

So, I revisited Session 1. I viewed the video by Seth Godin again (it’s hilarious). I made a new list of words. I answered the questions and brainstormed. In the end, it was confirmed: second time – same creed.

Here it is: Everybody is somebody.

I see this differently than other perfectly fine creeds that may look the same: All Lives Matter and We’re all in this together and Everybody is equal. I don’t disagree with any of those things. But they don’t mean Everybody is somebody.

It’s about the fact that every single one of us started out with a tiny body and a precious soul. Some of the bodies turned out a little different than others and don’t quite fit the prevailing mold. Some of the souls have been crushed under the weight of reality while others exalted by the whims of society, professional sports, and Hollywood.

But nobody is less than somebody.

Good golly, Miss Molly. I sure wish I lived this out. I wish I wasn’t ever mean-spirited or envious or proud. I wish making a creed was the key to living more like Jesus.

But when I figured this out – really nailed down those words – my focus became more clear. What I write, what I do, how I live – all of those things should reflect what I believe. Click to Tweet.

And, by the way, if you don’t feel like somebody when you’re around me, call me out on it. It’s the only way I’m going to Make Better.

And, by the way, what’s your creed?