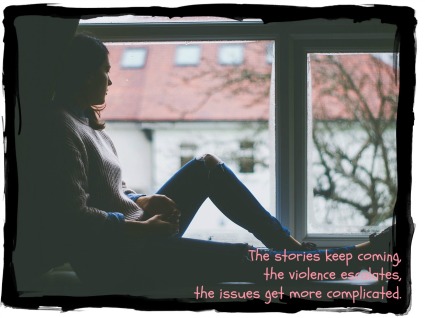 The questions have been asked: “Is he a racist? a religious terrorist? or is he mentally ill?”
The lines have been drawn in the sand: “The institution will be completely ruined” vs “No one can legislate who you love.”
The economic and political positions have been established: “This whole system will collapse under its own weight” vs “Thank goodness I can go to the doctor.”

And my heart can’t take very much more. Oh, I don’t mean more hard news. Or decisions that do or do not rigidly align with mine. Or political divisions that further polarize an entire nation of individuals.

No, I’m almost to the breaking point because of the response to the response. In the past, I have vowed to completely ignore those rabbit holes on social media called “comments.” Reading them is like watching a fierce and lawless war of words among people divided by a mile-high fence.

For none of them can see the others’ faces or expressions.

Or their family rooms, or their picture albums, or the single china tea cup their grandma smuggled out of Germany. They can’t hear the invaluable nuance of a human voice, one that just may turn what could sound like a snarl of disgust into genuine concern.

They cannot connect on any level at all except the black and white print of the flat screen – devoid of any feeling or compassion – and maybe a picture so small that it doesn’t even bear notice. Worse yet, nobody has a ghost of an idea what the others have experienced in the past minute or day or week or life…

And on and on it goes, civility becoming more and more pale with each angry reply.

I cringe as I follow the posts of lovely people, brave enough to share what makes their heart beat fast or their blood boil. With seemingly open hearts and minds, they are willing to start a difficult conversation, only to have mean-spirited strangers call them “stupid.”

By a show of hands, how many of us has EVER changed our belief systems because someone, friend or foe, inferred that, since our opinions didn’t match up with theirs, we were somehow “less than?”

Remember, these are not comments about any of the news stories themselves. Not the fact that a young man followed through on feelings so dark that most of us cannot even imagine living inside his skin. Not the fact that the sweet congregation of a well-historied church opened their arms and lives to a person clearly on a mission to destroy them. Not the fact that a recent court decision changes the face of a sacred value.

No, we are responding to each other’s feelings with sarcasm and venom. We are speaking to each other as if there is only one answer to a problem so complex that unraveling it will take nothing – NOTHING – short of a miracle. And all the love we can muster.

Our condescending words demonstrate that we must be the only ones qualified to interpret or clarify words from the Father that others have obviously twisted to fit their personal vision. Our society is so mired in feelings of self-righteousness and entitlement that we cannot believe anyone but us four and no more has answers or ideas that could possibly have value.

Our agendas are strong. Our opinions go deep. And we cannot believe that the rest of the world dares to pose a challenge.

You betcha, I have opinions about almost everything that comes around. And long, long held beliefs. But, no, it’s not my job to make sure my voice is heard above all the rest. It’s not up to me to make sure that everyone who chooses to voice their position is either affirmed or corrected.

As a flawed and stumbling student of the world and the Bible, my opinion bears no more weight than any others. I don’t hold a magic key to solutions that have eluded everyone else. I don’t have better questions. They have been asked. I don’t have all of the answers. No one does.

I also have absolutely no excuse not to share my belief in God’s love and sacrifice. They are His gifts to everyone regardless of our short-comings and our resistance to His immeasurable grace. His ferocious love cannot be contained by even the most well-turned phrase or the most searing accusation.

And that’s part of my deal with Him: I get it all, but I can’t just keep it for myself.

However, my zest for spreading even the greatest story ever told can never be at the expense of someone else’s dignity or worth. I may cleverly disguise it as unbridled passion for the only real truth. But, in reality, it’s just my own brand of superiority. Ouch.

So, yes, yes, a thousand times “YES!” Let’s stand strong for our beliefs. Let’s always speak with conviction about truths we hold dear. Let’s not back down for one tiny second about the most significant things in life.

My zest for spreading even the greatest story ever told can not be at the expense of someone else’s dignity or worth. Click to Tweet